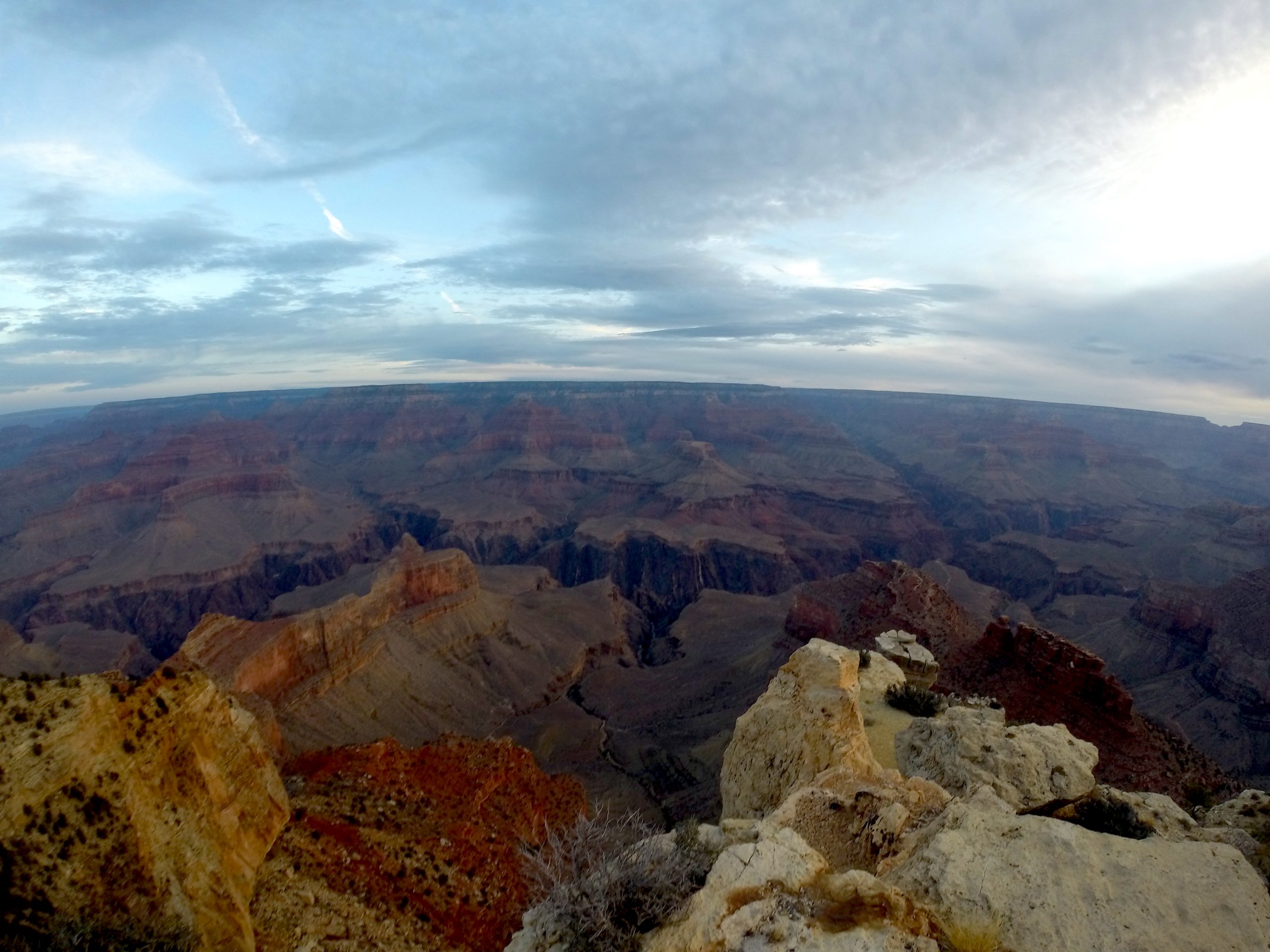 After a stint at Grandma’s place in Mesa where we were tied to exploring a general region, it was great to jump into the freedom of vanlife again! From here on, our direction was northward, and it was all new territory. Such a beautiful feeling, treading into the unknown.

We set off down the ribboning highway to Northern Arizona, where the nights are cool and green exists in other forms besides cacti. I was aware we had some climbing ahead of us, but I didn’t realize how steep the road would be. By some standards, it wasn’t that steep, but when you’re in a one-ton van with a weak motor, you notice even slight inclines.

The van actually quit one time for working hard in the intense heat of the day. Luckily, there was a pull-off with a viewpoint not far ahead, and I was able to restart her and drive another mile to find a nice spot to enjoy lunch. Life on the road is good at teaching one to seize opportunities when they come, by whatever means they arrive. After enjoying the view and letting the engine cool for half an hour, Nyma and I set off and made it to one of our long-awaited destinations that afternoon: Sedona.

Since first hearing about Sedona a few months before, my curiosity had been piqued. Naturally, I kept hearing more as I drew closer, and my interest only grew. It had highlining, rock climbing, mountain biking, trail running, and hiking, all at elevation for an added boost of fitness. The only thing missing from this little paradise was waves.

Sedona is held in reverence by many people for its unique red rock structures and mysterious vortices where trees grow in spirals. Depending who you talk to, these vortices are the result of either magic, magnetism, or cosmic energy. Regardless of how you explain them, they seem to attract all kinds of people.

The first person I met in town was a kid my age working in a crystal shop. He said he was drawn to Sedona a few months ago and was there until he learned the lesson life intended him to. What that was, he couldn’t say exactly. But he felt once he learned it, he would know. There are worse ways to find a home than intrigue, I think.

I didn’t see a vortex for myself, but I did see some crazy rock formations, unique river rocks, and everywhere I looked seemed straight out of a postcard. Even at the Starbucks I worked at one day, the backdrop was a giant red cliff in the middle of town. It must be inspiring living with views like that every day. I certainly could have gotten used it.

One of the hikes Nyma and I did took us down a red dirt trail, past some dry washes, and into a canyon surrounded by stellar rock formations. We tried to stay on the trail, but it didn’t offer many good viewpoints. When that’s the case, there’s only one solution: forge your own trail.

Sadly, we only had two days to spend in Sedona. We managed a couple hikes, a run, and some sightseeing, in addition to getting a bit of remote work done. Another thing I noticed was our van fit right in. There was some great camping just west of town, and we saw plenty of other vandwellers as we searched for a spot around dusk. It seemed like a nice little community.

Sedona was really one of my favorite places on our road trip, and I wish we could have stayed longer. If we were going to check destinations off our list, though, we had to get rolling! Thankfully, Sedona was just a warm-up to some of the sights we were yet to see. Next stop: The Grand Canyon.

Sunup to Sundown: One (Full) Day at the Grand Canyon

Our timing was perfect–the day we spend at the Grand Canyon happened to be the last day of the month: Halloween. After camping in the National Forest right outside the park, we woke up at 5AM to get to the Canyon before sunrise to see a good show. I know I said I don’t wake often for sunrise, but Grandma told me it had to be done. Who was I to argue with that?

I’ve gotta say, the show did not disappoint. When the sky began to glow and the clouds blazed with fiery sunlight, I was really glad to be a spectator.

We rode the shuttles all the way to the end of the road, getting out at various viewpoints along the way. Signs along the way serve to educated visitors about what they’re looking at. They point out how layers of sediment tell the story of the land, dating back hundreds of millions of years. It is fun to imagine; impossible to fathom.

One thing I couldn’t wrap my head around was that at one point in time, all of it was underwater. That piece of the story is very hard to imagine when you’re standing at 7,500 feet. Though parts of the canyon do resemble the bottom of an ocean, in some ways.

Still, the awe of it all never wore off. Every time I looked down into the canyon, my reaction was always the same. “What the–?” Comprehending the canyon is not something one can expect to do in a day. I’m not sure what amount of time would be enough, though: a month, a year, a lifetime?

Light crept slowly into the canyon throughout the day, revealing ripples and colors hidden in the shadows. Colors transformed throughout the day as the sun traced its arc: red, orange, yellow, purple. By sundown, I felt like I was looking into a different canyon.

One of the best parts of living in this age of technology and working a remote job: you can find WiFi everywhere. Even the Grand Canyon. Okay, maybe not in the canyon, but at the visitors center. To be honest, it was a little spotty, but I managed to log a few hours and get out again in time to see the sunset.

From sunup to sundown, Halloween at the Grand Canyon was a success. We even got candy from a friendly employee who was feeling the spirit. It was nice gesture I remember vividly, especially since no one else acknowledged it was a holiday. The older I get, the more I seem to appreciate the little things.

In the spirit of Halloween, I was inspired to have a fire that night. Bundled up with a beer around the warm glow of flames, Nyma and I sat listening to coyotes yip somewhere in the night. It was the perfect ending to an action-packed day.

Vanlife isn’t all peaches and cream, but it’s days like this that remind me that it’s all worth it.

New to the journey? Catch up on our Adventure Van series and live vicariously through Nyma and me!