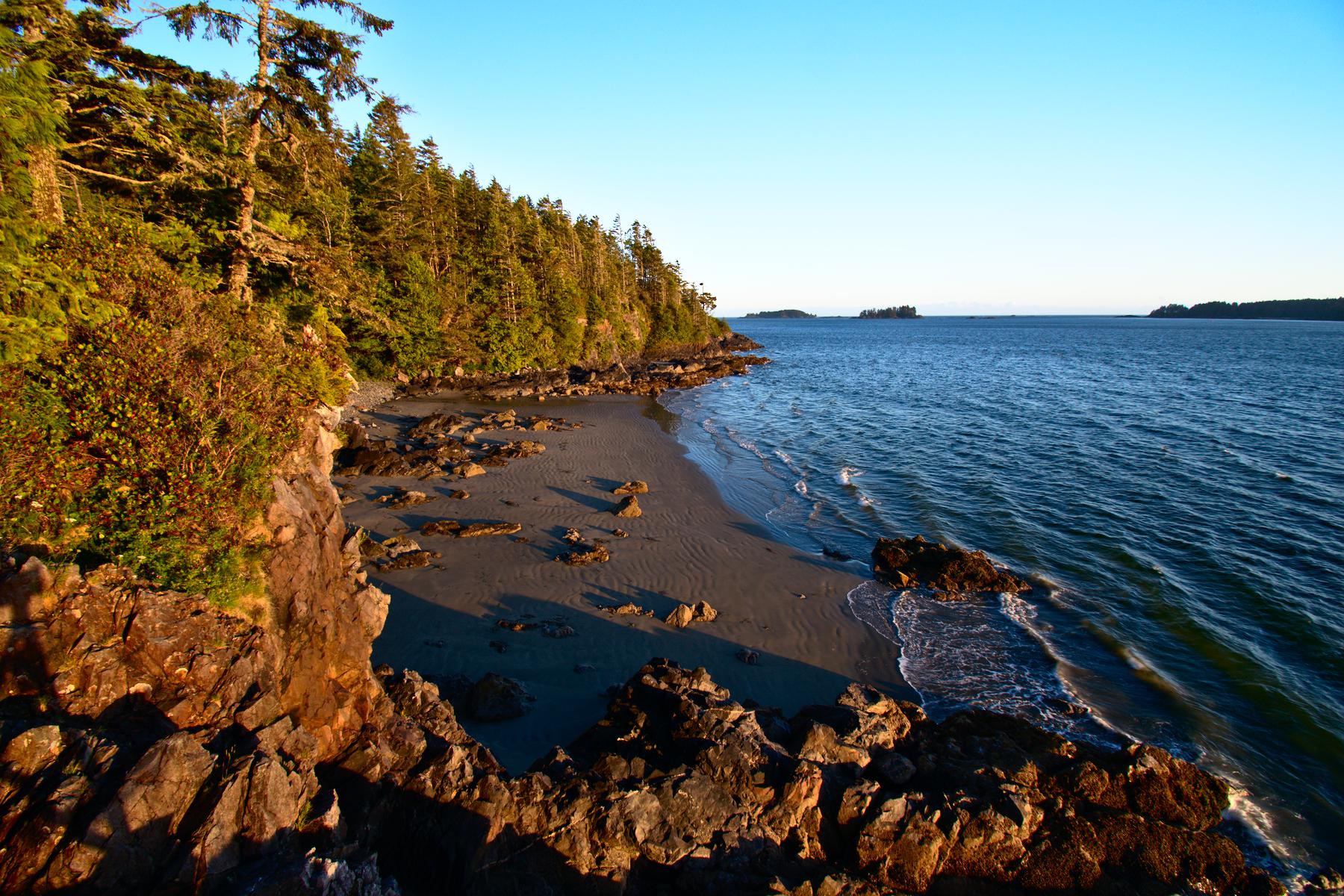 My suspicion is confirmed: I love surfing. I think I surfed on all but one of the days I was in Tofino. I might be addicted. When I was out of the water too long, I began to feel antsy, agitated. But as soon as I entered the water, everything melted away and it was just me and the sea. Some days I’d have some good rides, others the waves were short. No matter what, I always walked out of the ocean totally blissed out. The better the session, the longer the glow.

I definitely made some progress as far as skills go, too. I tried out four different boards and really got the hang of this nine-foot hard top I was riding. One session the surf was particularly good, and I was catching wave after wave. I even carved a wave, riding it sideways to stay ahead of the break. Man, did that feel cool! That’s a feeling I’m after again, and again, and again.

While Tofino draws people for all matter of reasons, surfing has a powerful lure on most of the people who visit. Then there’s those who move here with one intention: chasing waves.

First is Cassidy, who shreds on a ten-foot board twice her size. She wakes up at 5am for a session before serving tables at a resort, then goes out again after work. She’s committed to the lifestyle—she lives, eat, and breathes surfing.

Then there’s Finn, who lives in an RV and works in adventure tourism, finding seasonal jobs wherever there’s surf. Watching him ride a longboard was mesmerizing; he showed me surfing could be an art.

We met randomly on a beach and ended up hanging out the whole rest of the day. He led us down this rogue path through the forest, where we scrambled down onto one of the most beautiful beaches I’ve ever seen. Soft golden sand sloped gently to the sea while mossy Douglas firs towered behind us. Long, slow waves curling from one side to another. It felt like another world; a world where the sun is always shining and the surf is always great.

I wish Nyma could have seen that beach. Normally she comes along and guards my stuff while I’m out surfing, but the beaches in the National Park are frequented by wolves, so she’s safer in the van. She comes whenever she can, though.

Even the unsuspecting get drawn into surfing here. Like Yens, a German kid who’d been hitchhiking through BC the last two months. I picked him up after his thru-hike the weekend prior, and ran into him again at the store in Tofino. Let’s go surfing! I said to him. He was down. I even had an extra board for him, so it worked out perfect.

That evening after catching waves, he confessed that it was his birthday. In case you’re wondering, we agreed that learning to surf is a solid way to spend your birthday! To me, this seemed like one of those times when the universe aligns to make things extra special. I was happy to be a part of it.

Tofino is Not Van Friendly

As great as Tofino was, we got the urge to move on before the second weekend rolled around. There are simply too many people here during the summer. It is a big tourist destination, and well, with that comes all the annoying tourists. People walking or driving around, oblivious to everything.

The town also doesn’t let people sleep in their vehicles. The mayor has zero tolerance for it. They will wake you up at any hour in the night to move you along, or worse, write you a ticket. This is a major bummer for vandwellers. The only option is a logging road about 30 minutes outside of town. If you have dreams of doing vanlife in Tofino, be prepared to waste a lot of gas or find a job from someone who will provide you a space to park your van.

Trees ripple on the surface of the water. Roots of fallen giants cast shadows in the current. Sitting quietly, soaking in the evening, a young buck prances along the rocks and slides into the salty lake for a swim. It is a gift to witness his grace. I cannot see where (if) he exits the water. I would not be surprised if he disappeared into it, one child of nature merging with another. Life speaks in a different language here and I am moving slow enough to listen.

This place is growing on me. Every day it feels more like home. Our morning walks through the mossy forest, past towering trees and quivering ferns, to the river that flows gently into the lake. Playing fetch with Nyma for hours every day, waiting for the weather to shift, for the wind to pick up. Evening strolls along the rocky beach to do yoga at the point where water surrounds us on both sides. We are never more than a few footsteps from the water. I am vibin’ with the rhythm here. Slow and grateful. No rush about anything. Except chasing wind.

So far, the weather hasn’t been great. Considering we arrived during a monsoon on Friday, it’s gotten way better, though. Everyone keeps saying, “Wait for the wind. It’s worth sticking around. You won’t believe it when it starts.” I am determined to stay and witness it. When the clouds clear and the sun starts to blast, thermal winds get sucked inland through the channel and rips across the lake for a solid 6 hours every day. Amazing for wind sports.

Nitinat is definitely a place I could get stuck for a while. We have already been here longer than I intended, and I have no inclination to leave yet. I think only running out of food will force us to leave. Nyma doesn’t mind – she loves it here! She hasn’t worn her leash in a week and she gets to play fetch probably three hours a day. Our favorite thing is to throw the frisbee upwind and it just floats there, perfect for Nyma to take an epic leap to grab it out of the air. She’s getting really good at it. Nitinat is an awesome place for dogs.

The Lure of Kite Surfing

I’ve only been out a handful of times, and I already know I love this sport. The sensation of gliding across the water while being pulled by a kite is something else. I only took my first lessons this January, and Nitinat Lake is already the third place I’ve visited specifically to kite.

I’ve been taking lessons here and am proud to say I have made significant improvements. I have gone from riding for a couple of seconds to riding for a minute at a time and edging consistently upwind. Today I was given the green light to go out on my own. Whoo! I’ve still got a lot to learn, but I’m pretty stoked at how far I’ve come with only about 9 hours of lessons.

My dream is to drive the van along the coast and trade days surfing and kiting. Eventually, I’ll even combine the two! Use the kite to catch bigger waves than I could without. It will be epic. Chasing waves along the west coast – this is what vanlife is all about.

There will be plenty of kitesurfing in my future and my time in BC is slowly running out. I am still trying to decide if I’ll make the trek out to Banff and Jasper National Parks. It’s the perfect season for it, I’m just not sure if I’m up for the long drive.

If you missed our last post about our first weeks on Vancouver Island, check it out.

Don’t want to miss our next post? Sign up for email updates in the bar to the right!