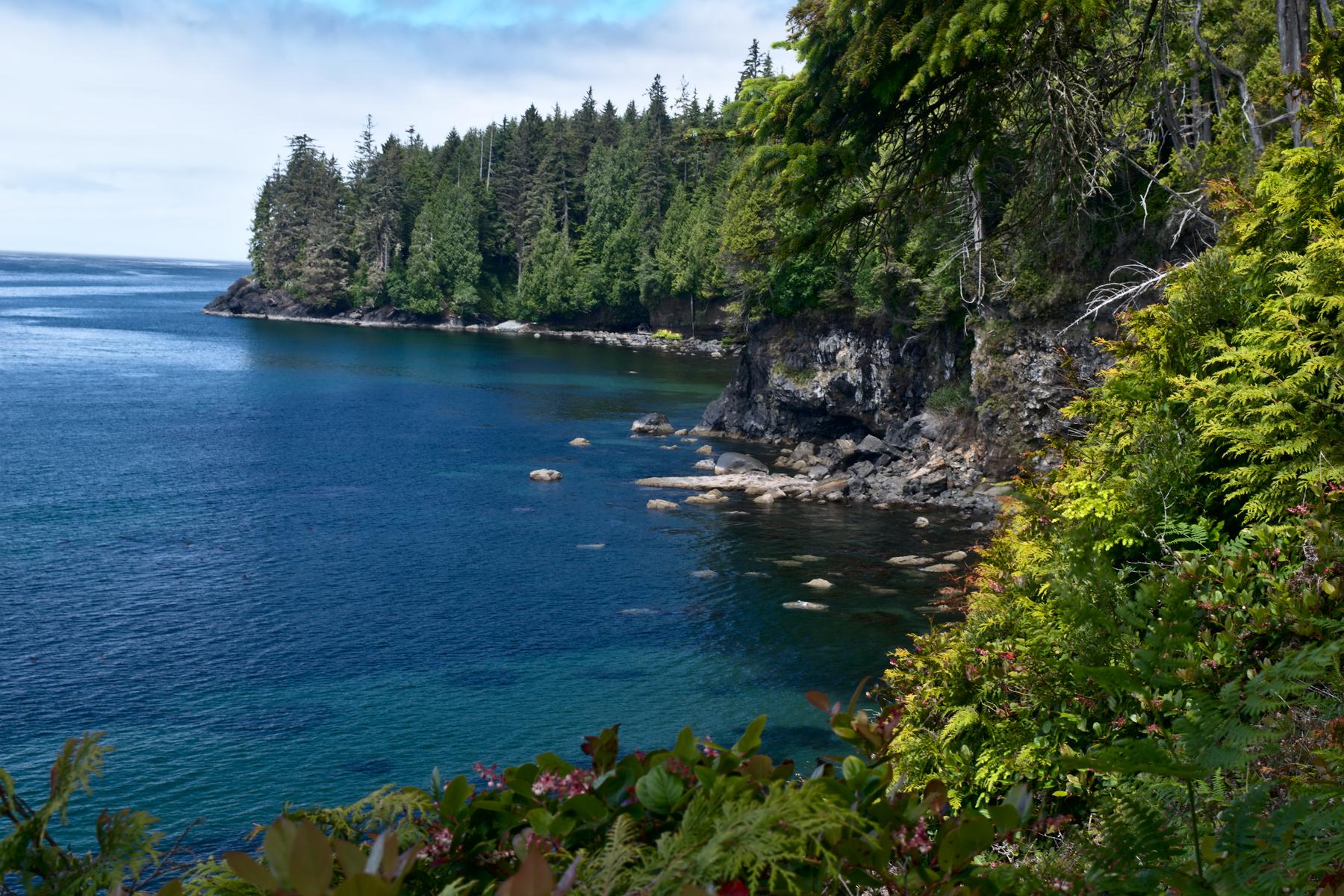 It’s been two weeks since Nyma and I left Portland. Doesn’t feel like that long, it really doesn’t. But at the same time, we’ve seen so much it feels like it could be longer than that. Travel does a funny thing to one’s sense of time.

The best part about this trip so far? We haven’t spent a single day away from water. We’ve either been on the coast, near a lake, or on a river like we are right now, at a scenic rest stop with free WiFi. There’s water everywhere on this island, and I’m not complaining one bit.

So far, my impressions of Vancouver Island have been great. The scenery on this island is gorgeous, the people are really friendly, love dogs (they are very lax about leashes here), and seem to really care about protecting their wilderness and green areas.

We just visited a little town called Nanaimo that had an unassuming park in town with a salmon-spawning river and waterfall, as well as a lake just a ten-minute drive from downtown. You can’t have better access to nature than that! Two days in a row Nyma and I started our day with a three-mile walk around the lake before heading into work. We were both happy campers – Nyma tired from fetch and me with a clear mind.

Then there’s Victoria, the biggest city on the island. It’s a little slice of Europe with West Coast flair. White bulb rooftops reminiscent of the Victorian era decorate the skyline, but it has a laid-back community that is serious about nature, coffee, food, and beer. I know I can’t be the only one who thinks that sounds like heaven.

Did I mention Vancouver Island has miles and miles of coastal trails? A person could hike the whole stretch of coastline from north to south if they wanted to and had transportation across inlets. Nyma and I spent all of last weekend hiking there. We did a 10-mile section of the south coast each day to get a feel for it. Boy, is that tough terrain. A lot of up-down, up-down, and scrabbling over rocks. Always a beautiful ocean view over our shoulder though, and mossy old-growth forest around us.

The trees grow oddly here on the coast. They twist, curl, grow small like bonsai trees or grow two or three large trees from one root system. Needless to say, there is always something interesting to look at! We were pretty beat up after the second day and slept for nearly 12 hours that night. Took it easy for a day after to recharge, then we were good to go.

Nyma and I just left a lovely riverside rest stop where we camped and spent most of the day. There were a few other van and truck campers who were really friendly. It was nice to have some company and long conversations after two weeks alone on the road. We’ve met a good amount of people in passing and I’ve had quality conversations for sure, but there’s nothing like a conversation that slowly unravels through the evening, morning, afternoon.

Jacob and Rose have come all the way out from Québec and have no real itinerary whatsoever. Just going wherever the wind takes ‘em. In our evening discussion, the topic of feeling rushed came up. We both agreed we feel compelled sometimes by an urge to keep moving, to continue forward on a trajectory that may be a little too fast to sustain. I think it is easy for our minds to fall into the rhythm of the road, grasp onto that momentum and want to carry us forward until we’re too tired and say no more driving. Call it a day.

There is also the excitement that comes from exploring somewhere new. Studies show that experiencing novelty floods the brain with dopamine, producing a literal high. One can become addicted to this feeling. And why shouldn’t they? It’s awesome visiting somewhere that feels new. There are other productive emotions and states of mind that can come from travel, but you have to allow them room to grow. There are many things you’ll miss if you whiz down the road without stopping to take in the scenery.

Just kidding…Nyma may not be able to drive, but she is a fabulous road trip companion! She encourages us to stop frequently for walks every chance we get. I deliberately consult the map for places we might stop for a hike or break along the way. No reason to drive a long way without stopping to stretch our legs a bit. On this island, the landscape might be radically different from where we begin or end up later in the day, so that’s cool too!

I’ve also learned that Nyma loves fishing. She stands very attentively while I cast and looks out on the water until I reel in the line. She hasn’t seen me catch a fish yet, but she looks like she knows exactly what to expect. I’m continually astounded by the keen sense of awareness Border Collies have. At two years old, Nyma is smart, and still getting smarter.

Now we’re off to Tofino to catch some surf! Spending so much time looking at the ocean and seeing waves start to take shape has really got me craving to be out there catching some. I picked up a wetsuit my first day on the island, so all I need to surf is rent a board for $20/day. Reminiscing about my time in Santa Cruz, I suspect I will find myself in a time warp here and not want to leave for some time. And I’m totally okay with that. Just going to take it day by day – my preferred way to travel.