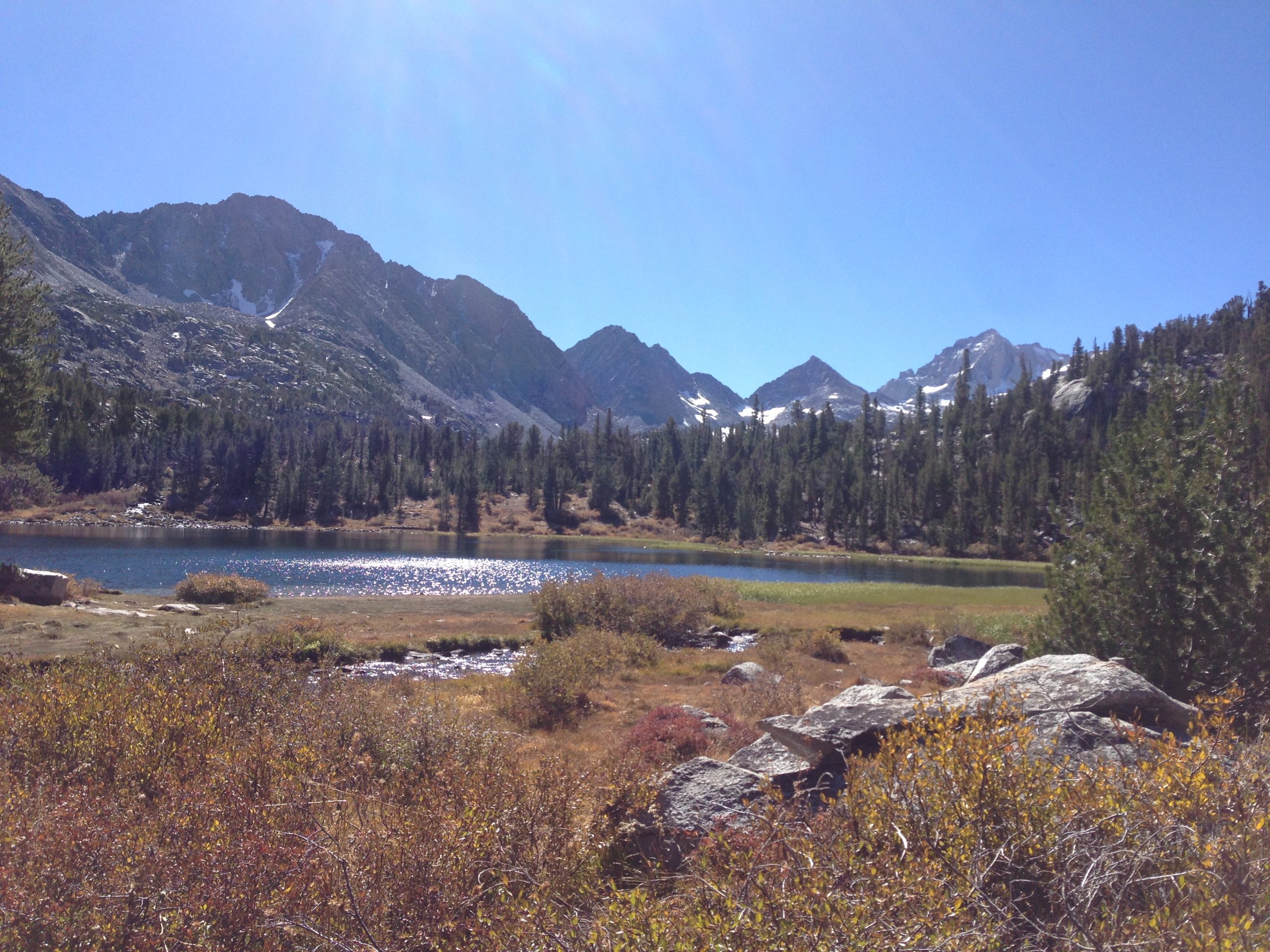 As we descended the hill, the mountains snowy peaks faded and a desert unfolded before us. Everything was bleached gold by the sun. The blue oasis of Mono Lake eventually appeared and I knew our destination wasn’t much farther.

Sitting in the shadow of the Eastern Sierras, Bishop, CA is an outdoor enthusiast’s dream. It has incredible access to nearly any kind of outdoor activity you can imagine–rock climbing, mountain biking, alpine hiking, mountains, rivers, lakes–you name it! With a population of only 4,000, the light pollution is almost nonexistent, and starry skies are just icing on the cake.

It is also quite popular with the transient community of vandwellers and car campers that traverse around North America. Based on my experience, Bishop has a siren’s call for rock climbers, luring them from crags far and wide. Moab, Yosemite, Sedona, Smith Rock, Indian Creek…Bishop holds a place among them.

Like most of those transients, I often found myself at the local watering hole (coffeeshop in this case) to do my remote work—the Black Sheep. I got a lot of work done and met some quality people here. If you’re searching for someone and they’re not on the rock, chances are good they’re at the Black Sheep. This shop roasts its own coffee, has great prices, and you’re guaranteed a memorable conversation or two.

One of my first days there I joined a couple friends for a hike at South Lake. Starting at a lake at 9,000 feet, we climbed gradual switchbacks until we reached a plain with lakes. This was Bishop’s Pass, an oasis nestled among towering mountains. Despite the elevation, the hike felt pretty easy. Naturally, I got the idea to try running it later in the week.

Now, having hiked a lot and run occasionally my whole time on the road, I was in pretty good shape. At least I thought so when I began the run at my normal pace. Turns out running at elevation is a totally different beast from hiking. Within three minutes I was huffing, blood throbbing in my temples, and had to stop to walk for a minute. By slowing my pace to about 10-minute miles I was able to make it up to the pass, around the lakes, and back again in one piece. Boy, was it a workout!

Nyma had no role in stoking my confidence, who appeared to be totally unaffected by the altitude. She continuously raced ahead to sniff out the trail, circled back to me, and raced ahead again. It caught up to her at the pass, though. Her tongue hung practically to the ground and she was panting hard. A few gulps of the crystal lake water and she was good to go, though this time lagging behind me for a change.

By the time we got back to the van, we were both ready for a nap. Nyma passed out right then and there while I drank a kombucha and ate a burrito I had forgotten about until that moment. It is times like these that I love having a solar-powered fridge in the van!

From there, we drove up the road to Lake Sabrina and found a spot on an island to read and play fetch. The water glistened with sunshine and the breeze had a faint hint of autumn, chilly enough to persuade me to find shelter beside a rock. I was reading Howl’s Moving Castle at the time and it was quite enchanting—even more so with a spectacular view in front of me whenever I looked up. It was a lovely afternoon of rest and recovery. Well deserved after a brutal run.

But the day got better! After this I met up with the gang at Happy Boulders on the other side of town. It was late in the day, so I mostly hung out while the others climbed. After an afternoon alone, I was grateful for the company.

As dusk approached, Nyma and I ventured up high to catch the sunset. We made our way up and over huge boulders (at one point I even had to lift Nyma because she couldn’t make the jump) to find a vantage point. Here, the world opened up onto a vast plateau. I knew it eventually dropped off, but it appeared to go on forever.

It gave me the sensation of being on another planet. The sky was drenched in hues of gold and rose, silhouettes of mountains painted the horizon. I stared, mesmerized, until the swirling shadows of twilight reminded me to get back to the group. We found them walking down the hill—perfect timing.

The winds started that night. Clouds of dirt swept across our headlights, obscuring the road from sight. The winds blew harshly all night and I felt very cozy tucked in my warm bed. Even when living the vanlife, you don’t take shelter for granted in stormy weather.

Naturally, I did a fair share of rock climbing while in Bishop. It’s one of the biggest draws of the area, so you’re kind of missing out if you don’t climb when you visit. Bouldering and top roping on granite and volcanic tuft—whatever was on the agenda for the day. Each situation offers challenges of its own, though the prevailing constant is fear.

Of the two modes of climbing, bouldering is definitely the more dangerous. You may not climb as high, but your only safety net is the crash pad. The ground can feel a long ways away when you’re dealing with a crux 20 feet up. Climbing on ropes always gets my adrenaline pumping, though. Looking down when I’m 50 feet up or more always makes my hands sweaty. While my first instinct is to stop moving, it is very satisfying to ignore that and keep going.

People often say they could never climb because they have a fear of heights. Many climbers I know (and highliners too, for that matter), say that fear is the very reason they got into climbing. It’s all about your mindset. Are you going to let your fears dictate your life, or will you take control and face them?

It’s very healthy to conquer your fear. If that’s the only thing I do in a day, I consider it a success. The elation that comes from that can go a long way.

The most challenging climbs I did were in the Owens River Gorge. Long routes that were just about the right difficulty for me tested my technique and endurance.

One route, in particular, was so long I considered giving up halfway. I was on a ledge and the next section looked really exposed. As I waited for my muscles to rest, it became clear to me the longer I waited, the less likely I was going to finish the climb. Before I could dissuade myself or consciously decide otherwise, I reached up for the next hold, then the next. Before I knew it, I was slapping the chains and let out a yip that echoed throughout the valley.

In my experience, the best athletic results come when you turn off your conscious mind and allow instinct to take over. This is called flow. Regardless if you’re talking to athletes, musicians, artists, writers, coders, etc., flow is the mental state we are all trying to reach. It is where the magic happens. As far as I can remember, that was the first time I had achieved flow while rock climbing. Only now can I begin to understand the immense appeal of the sport.

Of course, two weeks in this awesome place wasn’t long enough, and I’ve only just scratched the surface of everything that happened. This may call for a follow-up post.

If you’re just tuning in, catch up on our West Coast adventure!