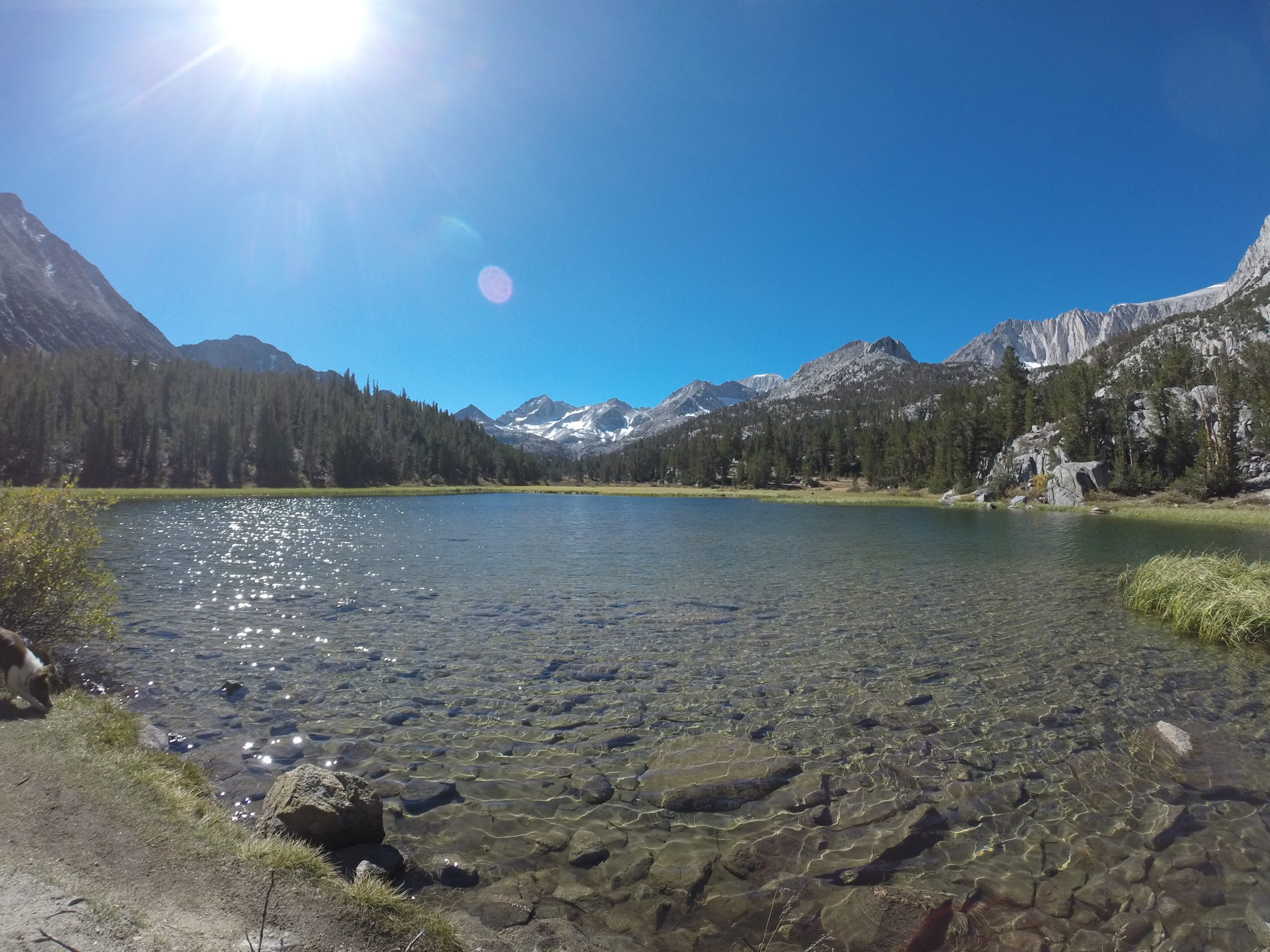 Driving east from the ‘burbs of San Francisco, our compass pointed in one direction: Yosemite National Park. After spending a long stint in civilization, it was high time to unplug and wander in the woods for a weekend.

One of my goals in setting out on this trip was to see as many National Parks as I could, and Yosemite was the first. Nyma didn’t know it at the time, but we were gearing up for some epic hikes. That’s one thing I really admire about dogs—they never know how far they’re going, but they always give 100% and are stoked as hell. Just one of the many lessons we can learn from dogs.

As we neared the entrance, we pulled off on the side of the road and slept under a star-studded sky. The cold made them shimmer like winter, and my excitement to be visiting Yosemite again made sleep slow to come. My dreams that night were filled with mountains and memories.

We woke with the sun and were among the first to enter the park—a feat only possible for me when adventure is on the agenda. After a cup of coffee and a bowl of yogurt and granola, we hit the famous Four-Mile Trail. This 9.6 round-trip trail climbs about 3,200 feet from the valley floor to one of the most epic lookouts in the park.

It was a chilly morning, but between the elevation gain and our pace we worked up a sweat pretty soon. I don’t usually take many breaks when I’m hiking, but this hike was an exception. As we climbed switchback after switchback, it seemed like every few feet posed another amazing view of the sprawling valley below, an impressive rock face, or a rainbow-haloed waterfall.

Eventually we rounded a bend to find the magnificent presence of Half Dome peeking through the trees. Talk about a rock feature! Scraped clean on one side and towering above the valley, it is a testament of the powerful earthly forces that sculpted this landscape.

At last we reached the top of the trail and found ourselves among many onlookers at Glacier Point. A road extends all the way here so it’s possible to drive, but where’s the fun in that? We all know a view is always better when you earn it. If you’re looking for a viewpoint that is more remote and are willing to work for it, Cloud’s Rest offers the best view in the park, hands down.

Regardless of accessibility, views like this are incredible and I urge everyone to see them with their own eyes. See the snowy peaks, the glistening granite, the waterfalls splashing rocks far below; feel the breeze flowing in the valley, your shirt flapping in the wind; sneeze when the sun and pine sap tickles your nose.

And while you’re there, try to fathom the geological story of this epic valley–how long it took to create and the powerful forces behind it. Glacial ice and water slowly carving this valley over millions and millions of years. Compared to this, we are just motes of dust existing for a blink of an eye.

Yet we spend our time worrying about how to make more money and what other people think about us. Do you ever wonder at the absurdity of it all?

We made good time coming down and enjoyed a nice nap in the van before heading out to find a campsite. There’s no free camping in the National Parks, so this was one of the few times we had to pay for camping on our trip. We enjoyed a beautiful drive up Tioga Road to Porcupine Flat, a first-come, first-serve campsite where I had good luck last time.

After lending a lighter to our neighbors to start their fire, we got invited to share the warmth. And boy, was it was welcome, because it got cold that night! We drank a few beers, shared some stories and laughs, and Nyma had some extra hands to throw the frisbee by firelight.

Campfires are an ancient, sacred thing that have a special way of bringing people together. Not only can I bask in the warmth for hours, but the world seems so much simpler when it is reduced to a ring of stones and people around a fire. With our spirits soothed by conversation and dancing flames, we all enjoyed a night of untroubled sleep.

To compliment our 10-mile hike the previous day, we hiked another seven miles (round-trip) to Lower Cathedral Lake. Starting from the roadside trailhead in Tuolomne Meadows, this hike is a gradual climb through lodgepole pine forest before opening up to a crystal-clear alpine lake.

The forest was covered in snow this time of year, and Nyma was stoked! She bit, rolled, and slid all over that shit. She chomped snowballs into oblivion. Seeing her play in the snow is always worth a good laugh.

We were pretty tired once we got there, so we found a quiet spot across the lake to lay down for a nap. It seemed silly that everyone was gathered on the shore nearest the trail with the view of Cathedral Peak behind them. But hey, I wasn’t complaining.

As the sun glistened in the crisp, blue sky and skitter bugs drew ripples on the water, I dreamt. It was one of those peaceful dreams where the dreamworld blends with reality and you feel only half-asleep but wake feeling extra refreshed. I followed that up with some meditating and wrote in my journal.

Of course, I was playing fetch with Nyma the whole time with the uncanny talent for multi-tasking that every dog owner or parent picks up. Nyma won’t go in the water farther than her legs can touch, but she loves splashing in the shallows for a stick. She can’t get enough of it! We hung out at that lake close to three hours, napping, daydreaming, and playing fetch. It was a perfect day.

Winter Comes Early in the Sierras

After our peaceful day at the lake, the icing on the cake was learning that the Tuolumne Meadows campsite was still open. I was worried we were going to have to backtrack and waste a lot of gas, but our timing was perfect. Apparently, all the pipes were starting to freeze, and we caught the last night of the season. We were honored to help close it down.

The ranger told me to keep Nyma close on a leash because they’d had coyotes scare dogs away from their owners while the rest of the pack waited in the forest. I wasn’t worried Nyma would be eaten by the coyotes, but feared she would be taken in as one of their own. No, that I couldn’t live with; I heeded his advice.

Not that we stayed up late, anyway. As soon as the sun disappeared the temperature plummeted. The meager fire I made from handfuls of sticks was enough for about an hour of warmth, then we called it a night. It was only September, but because of the elevation it was by far the coldest night on our whole trip. I didn’t have my awesome Marmot bag, so I piled on every blanket in the van and let Nyma curl up next to me. I still woke several times in the night, shivering.

You plan as much as you can, but there’s bound to be some hardship on any journey. I vouched to have my sister bring my sleeping bag when we met at Grandma’s house in Mesa, AZ.

After losing ourselves in the epic woods of Yosemite for a weekend, our compass now pointed southeast to Bishop, where we would spend a couple weeks with one of my best buddies, Dallas. He found himself there a couple years ago and has been there ever since. There’s gotta be something special about a place like that, right?

If you missed the first post in this series, be sure to check it out!