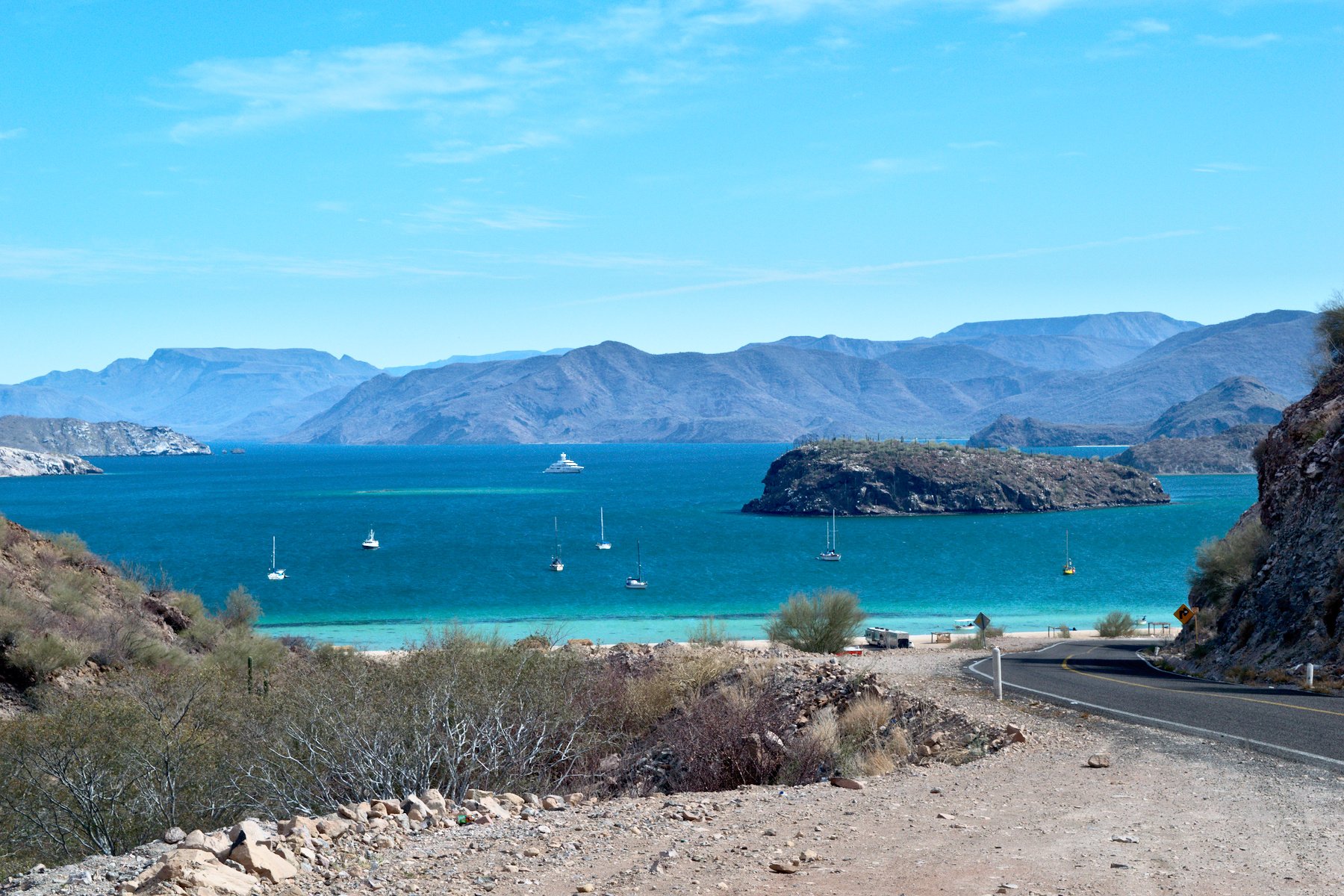 Across the desert we drive, our eyes scanning a landscape of saguaros, agaves, and other spiny plants that can survive off practically no water. We are surprised to find that the way is not flat, but consists of rolling hills, descents into deep washes and back up again. Mountain ridges like dinosaur spines defined the horizon.

The two-lane highway is narrow and riddled with potholes, so it takes all my attention to navigate it safely. When a big 18-wheeler passes going the opposite direction, I grip the steering wheel tight and hug the far side of the road, holding the van steady against the rush of air from the truck. It was a taxing drive I don’t look forward to repeating.

Roughly 300 miles later, we arrive to Concepción Bay on the Sea of Cortez, and the sight was a worthy reward for the drive. Bright, turquoise water with sailboats anchored beneath dark mountains. According to our map, there is a camp at the southernmost tip of the bay we like the name of, so we head in that direction. There are several beaches along the way that look inviting—Playa Burro, Playa Coyote, and Playa Requeson—but we choose the last one and drive past them all.

The winding road takes us alongside the bay and we are searching, searching. Then the road climbs up and away from the water, begins to ascend into the hills. We’re already skeptical of our map at this point because the last few beaches were in the wrong order, so we turn around and head back to Playa Requeson, which had an alluring island offshore connected by a thin sand bar I badly wanted to explore.

We pull into Playa Requeson with about an hour of sunlight left—plenty of time to explore the little island. The tide isn’t low enough for the sandbar to be exposed, but its shallow enough to wade there. Nyma’s never been too stoked about swimming, but she really wants to check out this island too, so she jumps in and paddles alongside us. The island consisted solely of mangroves, rocks, thousands of abalone shells, and a decaying pelican skeleton. Where all the abalone shells came from, I’m still curious about. The island did offer a fantastic view of the bay, though.

Nyma enjoyed the water so much the first time, she takes the long way back to shore. After a long day of driving, the water is quite refreshing! She usually likes to keep her feet on the ground, but now she thinks she’ll try swimming more in the future. In honor of Nyma’s bravery, we dubbed the island, Isle de Nyma.

That night, I marvel at the stars in the moonless sky before tucking into bed, when I notice little sparks igniting in the ripples on shore. Could that be what I think it is? I immediately step into the water and begin splashing around, prompting clouds of green sparks to blossom and swirl for a brief moment before flickering out. Bioluminescence! I am dazzled and play with the pure delight of a child.

That is a moment I will remember forever—splashing in bioluminescence on a silent beach beneath spinning galaxies. I’m beginning to think every moment might be filled with such magic, only most of the time we are too distracted to see it.

Entrepreneurs on the Playa

The next day we enjoy a slow morning talking and reading over coffee while letting the day unravel naturally. When the sun gets hot enough, we jump in to snorkel in the magnificent blue water. There is some coral on the side of the island, but the water is just cold enough that I’m shivering before long and have to head in. The visibility is not all that impressive, anyway. It is a refreshing swim, though, and Brian and I can proudly say we swam farther than we walked all day.

Surprise came in another form that day. What we thought was a quiet beach in the middle of nowhere turned out to be a hot spot for salesman with a knack. One after another, Mexicans drove up in trucks with blankets and trinkets for sale. We thought it was ridiculous at first, but these guys were true entrepreneurs, and it was only a matter of time before they found something we wanted.

By sundown, Brian and I had accumulated two new blankets, a shirt, four beers, and a fresh-caught snapper, which we cooked for dinner. And we didn’t have to go anywhere. They may have up-charged us a bit, but that’s the price of convenience. I’m pretty sure we spent more money that day than we had all week (excluding gas). Just another day in Baja…

Fish Tacos and Characters in Loreto

After a couple days relaxing at the beautiful Concepción Bay, it is time to continue south. The winds of La Ventana called us like a siren. Our timing works out so that we pass through Loreto around lunch time, so we stopp for fish tacos. We find the fattest, most delicious tacos of the whole trip at this corner taqueria. The fish is lightly fried, succulent, and bursting with flavor. You load up your own guac, salsa, and toppings so you can make them however you like. Brian tried the cabeza, but I stick with fish and carne asada. Three tacos was enough for lunch and dinner. It cost $7 for those and a soda.

Happily fed, we take a walk through town and discover a familiar atmosphere of Spanish architecture. Complete with plazas, tree-canopied streets, and colorful buildings, I feel like we’ve been suddenly transported to Europe. Naturally, we find ourselves walking on the boardwalk beside the seashore before long. Here, we spot a gypsy-style camper that catches our eye, and we strike up a conversation with the owner sitting nearby.

This fella, Scotty, winds up being a real character. He spends half the year wandering around Baja with his dog, and the other half on an isolated island in British Columbia where he owns a kind of commune. Traveling in a gypsy wagon is very fitting for him. He seems to understand life is the grand adventure, and was in no hurry at all. An hour later, after hearing his life story and more interesting tales than I care to remember, we are able to tear ourselves away and ramble on to La Paz.

If life is what you make it, it’s interesting to see how other people make theirs. Everyone’s got a different interpretation. That’s the beautiful thing about traveling—it’s a chance to step out of your life for a while and imagine other possibilities. Life can start to feel rigid if you stay in one place for too long, but pick up your roots and the world opens up for you. The part I’m having trouble with is hearing all the messages; that one’s an art I’ll never stop learning.

Our first night back in civilization we spend strolling the new Malecon (beach walk), which is filled with families, lovers, and young kids shredding it up on roller blades. We eat ice cream for dinner, crack a few beers, and are content to be part of the pulsing heart of the city. And boy, is it pulsing. Everyone seems to be out. We find out later it was the tail-end of a big festival that’s been going on for a few days. For a large city, La Paz has a very laid-back feel amidst all the chaos. I felt welcoming vibes, for sure.

The next morning, we find a local coffee shop to fill up our mugs for 10 pesos. A silly price, considering how incredibly tasty coffee it is, and it packs quite a kick. We sip our coffee on shaded benches in a park and write in our notebooks, each one of us wandering our thoughts. We write while the sun ascends above the roof of the neighboring church, its bells ringing every half hour. Our stomachs finally speak up and lead us to a small panaderia we spotted earlier. I order a savory chili empeñada and Brian orders a cinnamon roll, then we get the same again and switch to satisfy our envy for the other’s food. The owner received our compliments with a glowing smile, and we were certain he’d found his calling in life.

Before we leave La Paz, I take photos of some impressive murals and Brian gets another chance to skate the new Malecon. The fresh pavement is smooth and perfect for cruising on his aluminum board. He’s in his element carving around with his shades, backward cap, and open shirt flapping in the wind.

Finally, we hop in the Woolly Mammoth and drive southeast to La Ventana, where the thermal wind promises superb conditions for kiteboarding. Seeing as there’s no better place to learn, Brian is going to take lessons and will soon understand a whole new kind of stoke. And I’m taking the straps off my surfboard to unlock a new world of possibilities. Time to level up…

If you didn’t catch my last post, be sure to read about the beginning of our Baja adventures!