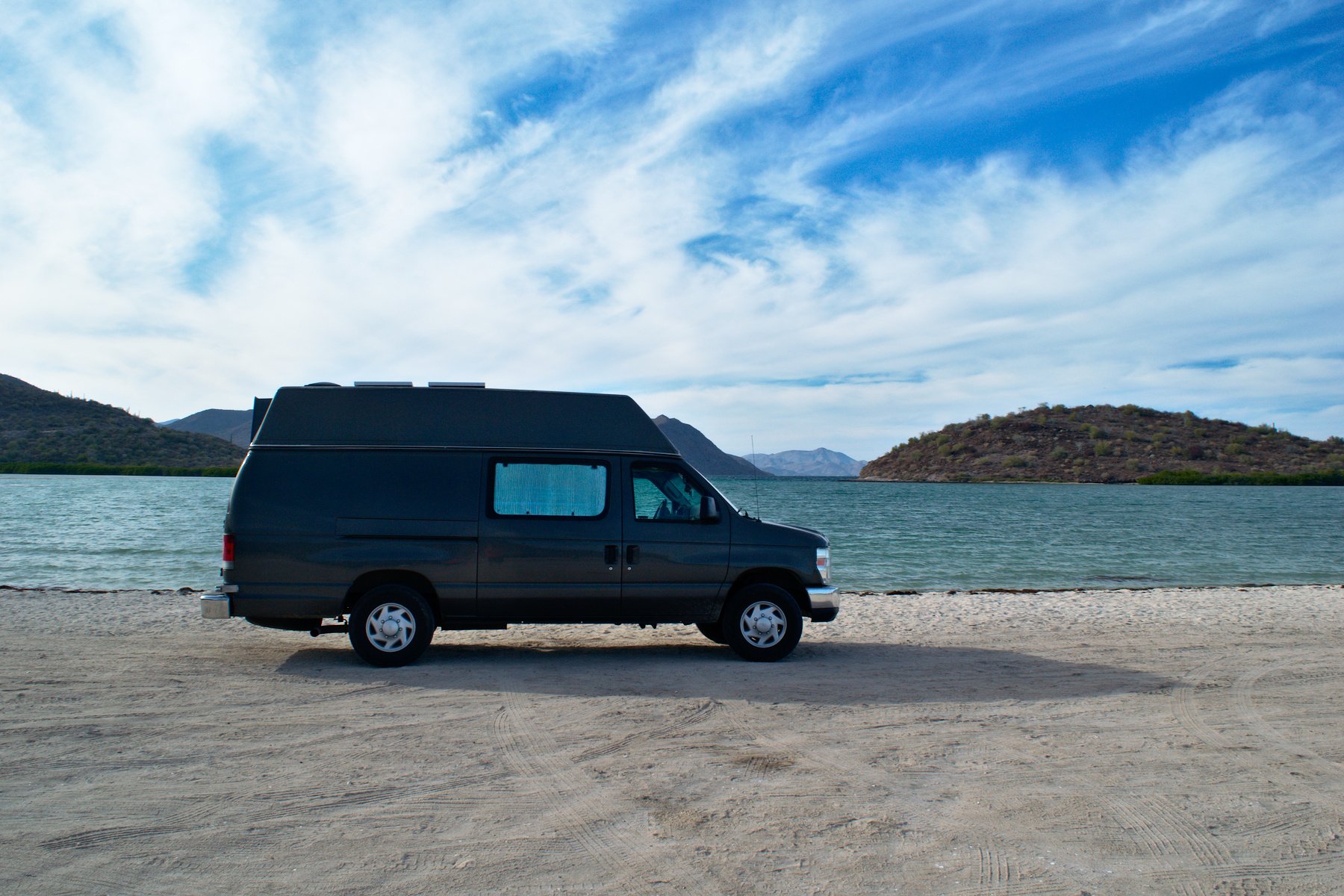 After four months of building out a new van, Nyma and I set off on our maiden voyage to the exotic land of Baja Mexico. I’ve dubbed this gargantuan Ford E350 the Woolly Mammoth (thank you, Sarah, for the suggestion!). 3000 miles into our journey and this van has been nothing but faithful. Aside from becoming temporarily immobilized in some extremely loose sand, it’s handled the rough roads of Baja with admirable ease and seems only to lust for more.

Perhaps the best news: we have AC! This is a game changer for these hot days in the desert. With our last van, driving in the heat of the day was dreadful and we did everything we could to avoid it. Now, we prefer to travel in those hours because we can blast the AC and stay cooler than we would otherwise.

Nyma and I were fortunate to have my good friend, Brian, join us for two weeks of traveling. This was the first time we’ve had someone join us for an extended trip in the van, and we loved every minute of it. Brian is an agreeable travel companion—he makes good conversation, keeps a keen eye on the surf, reminds us to stop frequently for fish tacos, and laughs at all my jokes. Nyma happily gave up her seat in exchange for pets. Together, we made an unstoppable trio. We found some incredible places by pure chance and were fully engaged everywhere we went.

We lucked out crossing the border. The day we went, it turned out to be a holiday and there were no crowds! After a quick check inside the van to determine we weren’t smuggling TVs or other contraband, we got waved on. No questions, not even a passport check. Easy breezy.

The Scene in Ensenada

Ensenada was our first stop, where some family friends hooked us up with some locals who made us feel very welcome. Here we had our first taste of ceviche tostadas, enjoyed a view from the top of the city, and got some local surf intel from a legendary shaper named Chega. The whole city seemed to be on the beach celebrating the holiday.

Our first impression: Mexicans know how to party. Kids were splashing in the water, adults were grilling and drinking beer, mariachi bands lit up the evening with song. We bought Tecates and sat on the promenade overlooking the ocean, glad to be in the heart of it all.

After a day chasing waves north of the city, we returned and explored the city some more. After chowing on some delicious fish and shrimp tacos, we sat in the plaza and watched a group of native kids perform a ritual under the full moon. We realized it was the solstice, the first day of spring. We sat entranced by their dancing and drumming, welcomed the chance to be still and acknowledge the shifting of seasons. All around us, city life carried on as usual, oblivious to the celestial event.

One of the reasons I love traveling so much is for the opportunity to develop a deeper relationship with the land. Many days, I lay eyes on hundreds of miles of land, marvel at desert, mountains, and coastlines; at night, I feel dwarfed under a sky full of stars, Ironically, it seems the reality of where I am in the world tends to strike in the quiet hours of night when the crickets are chirping, the cloudy streak of the Milky Way hangs motionless above me, and the silhouettes of cacti cast shadows into the sky.

After three days near Ensenada, we continued south. A windy, bumpy road through hillsides and dusty towns brought us to a little resort on the Bahia Santa Maria called Cielito Lindo. Situated beside a wide, long beach that resembled a desert wasteland, this watering hole was a very eclectic place. We loved the beach for its astounding surf in the morning and exceptional winds in the afternoons. Here, we found a place to satisfy Brian’s surfing lust and my kiting addiction in one place.

In the afternoon, we’d find our way to the bar for happy hour and indulge in the tastiest (and strongest) margaritas of our lives. Happy hour price was $2.50. Though we never saw anyone step foot on the beach, a trusty crew of retired Canadians showed up in force for happy hour. They took delight in our youthful presence and challenged us to games of pool. None of us were very good, so we were evenly matched that way. What was supposed to be one night at Cielito Lindo turned into three. We fell asleep each night feeling fulfilled and exhausted from our endeavors, and woke up to repeat the routine all over again.

In a way, we had found the pinnacle that every kiter and surfer wishes for—untouched waters all to ourselves. To me, it actually felt quite eery. I was nervous to take the kite too far out from shore, for instance, knowing there was no one there if things went sour. Brian and I both had the feeling these were sharky waters, though we didn’t talk about it until after. The conditions were so good, we weren’t going to let mere suspicion spoil our fun. Looking back, the suspicion feels more certain.

The day we left Cielito Lindo, our mission was to cross the desert and reach Guerrero Negro before sundown. But first, we had to find Brian a point break! A left-hand point break was at the very top of his Baja list, so we couldn’t leave without it. Our next stretch of driving took us across the peninsula away from the Pacific, so today was the day. It was quite a trek over bumpy dirt roads and a few wrong turns, but we eventually stumbled upon a wave of dreams.

Nyma and I stayed back on the cliff to take photos while Brian paddled out into the bay while long, crescent waves swept across the surface. He was dwarfed by the steep cliffs and mountains on the horizon, which made for some epic photos. He caught his left, too, and it was the gift that kept on giving. Got a thirty second ride out of it!

“Time ceased to exist in that moment. Dragging my hand in the water, it was just me and the wave,”

After his surf session, we left the whale bones of the little fishing village and headed into the desert. Driving down a windy, two-lane highway through a vast expanse of desert, we will ultimately arrive to the Sea of Cortez in Baja Sur. Here, there is the promise of great snorkeling and kiting opportunities. We’re going to get Brian hooked onto a kite and blow his mind. As soon as he feels the power of the wind, he’ll be converted.

If there’s one thing I’m learning as I travel, it’s that time is sometimes a better measurement than distance. Journeys take a while to ease into. Your mindset changes and your perspective sharpens as the unimportant things in life fade away. It is only what’s in front of you and what you think about that matters. Everything else might as well cease to exist.

This is true of everyday life, too. Take notice of what thoughts you give attention to. Are they positive thoughts or worries? If so, can you take any action to ease them, or are they simply taking up headspace? When we burrow ourselves in a routine, the momentum can often carry us along and make it easy to shrug off emotions. When your routine disintegrates, as in travel, you have more time to chew your thoughts and taste the emotions. You’re almost forced to, in a way. That’s the power of solitude.

Of course, Nyma is always there with her disc to pull me out of my reveries and remind me to live in the moment—one beach at a time.