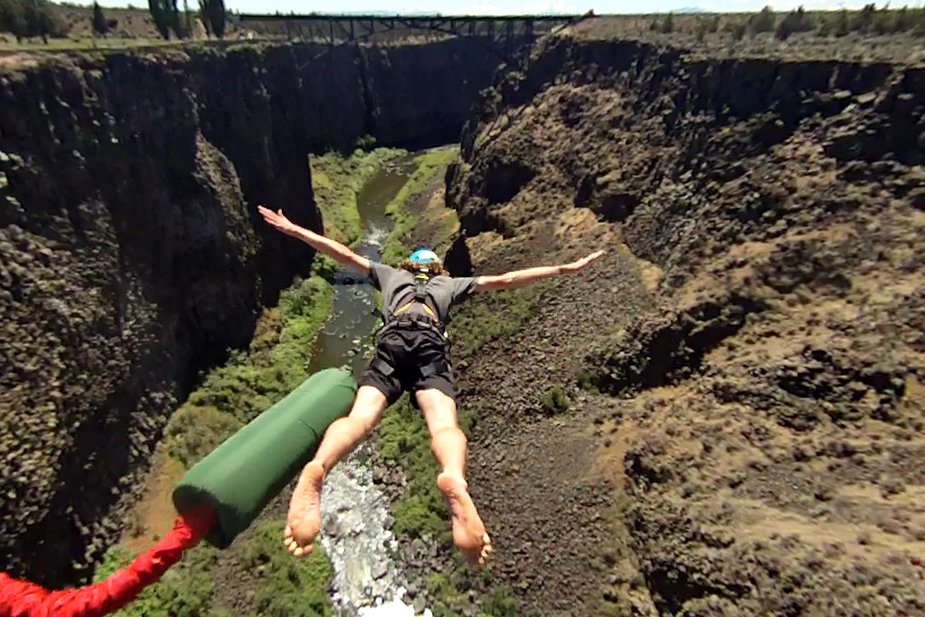 If your friends all jumped off a bridge, would you do it too? When your friends work at Central Oregon Bungee, the answer is yes.

I heard about this place when it started in 2015 and it took me a long time to build up the courage to step foot on that bridge. But once I did, there was no looking back.

“Everything you’ve ever wanted lies on the other side of fear.” — George Addair

Operating on a bridge overlooking the Crooked River Gorge, the largest commercial bungee operation in North America is no joke. It boasts a 250-foot drop and a full three-second free fall.

Standing 300 feet above the river, one glance over the edge inspires a feeling of awe and a slight spike of adrenaline in anticipation of what’s to come. I acknowledge the fear, but I’m committed to conquering it today.

“And that’s what it’s all about,” says James Scott, the owner of the operation. “If someone tells you they aren’t afraid, they’re either lying or there’s something wrong with them. I just did my 190th jump last week and it’s still scary.”

James is easy to pick out of the crowd. He is the most energetic one out there, walking around in a rock climbing harness strapped with all sorts of carabiners and webbing. A pair of sunglasses and a wide, jovial grin are glued to his face.

With a long history of skydiving and BASE jumping, James is well familiar with fear. You might even say he thrives off it. But he also gets his thrills by helping other people face it.

“I started this company because I want to share that feeling with people. I wanted to give people a way to face their fear. Bungee jumping is the safest way to do that.”

Once I was strapped in and the gear was double-checked, I was directed to the edge. Looking down, the bottom of the canyon stretched farther away and I suddenly felt much less confident. Before I could think too hard, my friends counted me down and I leaped off that bridge like superman!

I’ll be honest – I thought once I jumped, I’d be on the other side of fear. That comes later. The free fall was especially scary. Diving headfirst towards the ground the wind whipped my face faster than anything I’d ever felt, and my mind screamed silently as I plummeted faster and faster towards my imminent…

Then the bungee slowed my fall and the fear dissipated into nothing. My momentum was transferred into a giant bounce and I was gifted weightlessness. I did a backflip and felt so free! A succession of smaller bounces brought me slowly to a stand-still while I sat back and took in the incredible view.

I’ve never felt so zen as dangling alone in that gorge with nothing but the sounds of the wind and the water rushing below me. That moment was mine; I earned it.

Why Should I Bungee Jump?

Taking the leap off that bridge is a huge thrill. But it is so much more than that! It is a physical way to take control of your life and face your fear head-on. Once you do, you realize that fear was all for nothing.

“No matter what barrier you’re trying to work through—starting a new job, your own business, embarking on a journey or a relationship—this will translate to every area of your life,” James says.

“If you ever start doubting yourself, just remember you had the courage to jump off a 300-foot bridge. Not many things are scarier than that.”

You can find Central Oregon Bungee at Peter Skene Ogden State Park, just north of Terrebonne on Highway 97. You can make reservations online ahead of time or show up any weekend from May-September to conquer your fear.